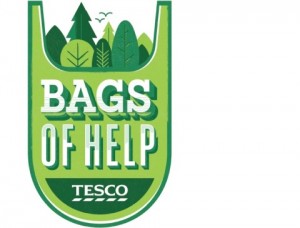 Tesco has teamed up with Groundwork to launch its Bags of Help initiative in hundreds of regions across England and Wales. The scheme will see three community groups and projects in each of these regions awarded grants of £12,000, £10,000 and £8,000 – all raised from the 5p bag charge.

The Father Thames Trust has been successful in reaching this voting stage to fund two exciting new Thames Landscape Strategy Projects: ‘Shires on the Avenues’, and ‘Hurst Park Wildlife Area and Towpath Improvements’.

Shires on the Avenues – following the successful trial last summer, that saw the re-introduction of heavy horses to manage the Ham Avenues, we are hoping that thanks to the Tesco’s funding we will be able to continue and expand the work.  To get to this stage we have successfully been awarded £8k to carry out the following:

The public open spaces around Ham House are criss-crossed with an historic network of avenues forming a nationally important landscape.  Laid out in the C17th, the avenues provide the structure to the landscape and provided wonderful long views, magnificent recreational opportunities and an important natural habitat.  Over the years the avenues have been degraded by litter, scrub and self-sown trees.  At their centre was the Great River Avenue – a 2 mile feature that includes formal avenue, woodland ride and protected sight lines.  This scheme will realise the restoration of a significant section of the avenue, a lost woodland ride.   Restoration would considerably improve biodiversity, increase recreational activity and reduce anti-social activity by improving access.  Volunteers will work alongside a team of heavy horses that are based nearby at Richmond Park to carry out scrub clearance and create habitat whilst the heavy horses will harrow the ride and move cut material to push back the encroaching vegetation. The visual link between Richmond Hill and Ham Lands will be restored. Along The Thames Path, horses and volunteers will manage scrub which has blocked views to the river. Coppicing and hedge laying will allow more light onto the towpath and increase vegetation diversity.

Voting for this project will take place in the following stores:

With the extra funding we will be able to carry out the following:

£10000 – Important views from the Great River Avenue and along the Thames Path are blocked by self sown sycamore and suckling elm.  This tree growth is also an identified barrier to use as it gives the impression of a neglected and lonely space – particularly for women and the elderly.  £10k would allow the hire of a tree contractor to remove some of the larger trees that are beyond the scope of volunteers.  Cut material will be moved by the shire horses and used to make habitat piles and a dead hedge.

£12000 – The woodland ride section of the Great River Avenue moves to a formal sight line passing through open grassland between the wood and the Thames.  The path connecting the two sections slopes down for 2.3m at a steep angle. This section has suffered heavily from erosion and is a barrier to many users. With this extra funding the project will be able to hire a digger to re-grade the slope to within accessible guidelines.  The shire horse team would smooth the new accessible slope with a harrow.

Hurst Park Wildlife Area and Towpath Improvements – we have been carrying out management along the Hurst Park riverside for many years with the Swingbridge volunteers. This project will take us beyond on-going management and help us to create new habitats and improve the viability of the riverside of the park for wildlife, community engagement and floodrisk.

The £8k project we are guaranteed includes continuing our partnership with the community narrow boat Swingbridge II, the proposal sets out to create a magical new wildlife area on the small compost area between East Molesey Cricket Club and Hurst Park.  A native hedge that was planted 5 years ago will be layed and gapped up to create a formal boundary for the site and self sown sycamore removed.  The site would be planted to encourage several specific insect and butterfly species – homes and feeders will be installed that schools and local children could learn from (through the existing TLS Outreach Programme).  Some cut timber would be shaped and installed on site to aid interpretation.  We would also design and print a leaflet to interpret the site and the kinds of wildlife that they could find in the park, on the River and in their own gardens. The adjacent riverbank in front of this area (1000m) would also be improved with this funding. Working with volunteers and Community Payback (Swingbridge ll) encroaching vegetation will be managed and habitat improved.  Dead elm and sycamore will be coppiced and native species encouraged.

With £10,000 the extra £2k would enable the TLS to put together a formal education programme working with local schools and youth clubs that would provide additional benefits to the existing outreach arrangements.  Working in partnership with the Hurst Park Residents Association 4 activity days would be arranged during which time the young people will be able to come down and participate in formal learning activities and volunteering.  These will be detailed to increase understanding about their local environment whilst helping to reduce the perception that this part of the park is ‘not for them’.  Ownership of open space by young people is important – this scheme would foster this.

If we are successful in receiving the full £12,000 we would also be able to pollard a set of willows in the park in order to increase their lifespan and make them safer and easier to manage in the future.

Voting for this project will take place in the following stores:

Bags of Help offers community groups and projects in each of Tesco’s 390 regions across the UK a share of revenue generated from the five pence charge levied on single-use carrier bags. The public will now vote in store from 27 February until 6 March on who should receive the £12,000, £10,000 and £8,000 awards.

For more information go to www.tesco.com/bagsofhelp.