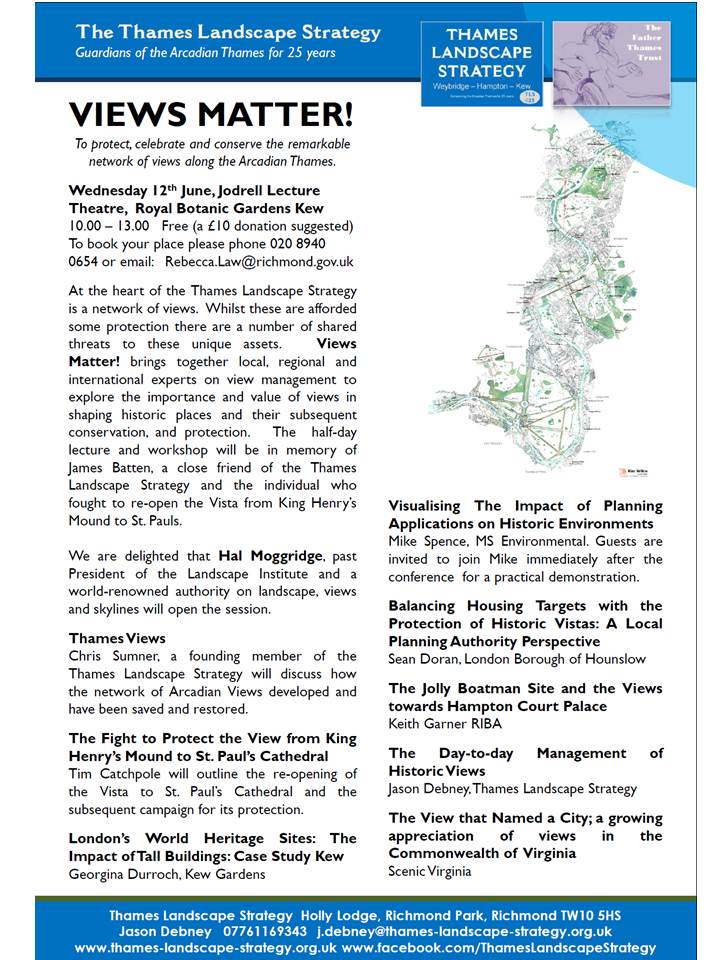 The Remarkable Network of Arcadian Views Between Weybridge, Hampton and Kew the River Thames meanders through a unique landscape of world famous parks, royal palaces and working communities known as the Arcadian Thames (meaning ‘rural paradise’). Centuries of settlement, aristocratic patronage and local action have left a remarkable legacy of architecture, accessible open space and wildlife considered to be one of the most culturally significant urban landscapes in the world, offering unrivalled recreational benefits. This Arcadia is a countryside in the city; a multi-layered landscape where people, water, history and wildlife co-exist. The sequence of palaces, parks, gardens and villas beside the Thames form a string of pearls; a designed landscape not just connected by the river and their cultural associations but also through an elaborate network of avenues, panoramas and vistas. This network of views provides the skeleton to the world-class landscape and establishes a structure of open space that in the 18th century led poets, artists, writers and thinkers to establish the Cult of Prospect. Collectively, they created a new way of thinking about the natural world; Arcadia became a symbol of idealised English scenery and is considered to be the cradle of the English Landscape Movement. Views have been at the heart of Arcadia for 300 years. The Thames Landscape Strategy It was a re-awakening of the significance of the network of Arcadian Views, linked to their remarkable survival, that provided the basis for Kim Wilkie’s ground-breaking ‘Thames Connections’ exhibition at the Royal Fine Art Commission in the early 1990s. This coincided with a growing realisation by local people that something had to be done to protect the river’s heritage in the face of rapidly increasing development. Local people were galvanized into action and in June 1994 the Thames Landscape Strategy was born and the 100-year vision at the core of the organisation was published at the Jodrell Lecture Theatre in Kew. For 25 years, the Thames Landscape Strategy partnership has been the guardians of this unique landscape; working through its network of local groups, individuals and riparian authorities to conserve, promote and enhance the wildlife, heritage features and recreational opportunities on and beside the river. At its launch however, there was very little interest in the conservation of views. There was no planning guidance for their protection and almost all of the Arcadian Views were overgrown, forgotten or in need of considerable repair. 25 years on, the 1994 Thames Landscape Strategy vision has changed the way that local planning authorities and riparian landowners protect their views. The TLS has championed the inclusion of views management in planning policy and has inspired local groups to fight for the protection of their cherished riverscape. Many TLS aspirations are now firmly embedded in partner core strategies. The View from Richmond Hill is still the only view in the UK to be protected by an Act of Parliament and was restored in 2002 by the TLS whilst the View to St Paul’s Cathedral from King Henry’s Mound is now given protection in the Mayor for London’s Plan. Historic Royal Palaces has restored the network of avenues in Home Park and, Kew Gardens in partnership with Syon House have re-opened their network of cross-river view lines, with view conservation now at the heart of their World Heritage Site Conservation Management Plan. Many of the other designated Arcadian views are given local protection and have been opened up and restored by the TLS and its partners. Despite these achievements, the long term fate of the Arcadian Views is once again uncertain. Recent Government housing targets have increased the pressure for development along the Thames whilst the public funds to maintain the fragile views are being cut year-on-year. The peace and tranquillity of the Arcadian Thames is under threat. Never before has the need for the Thames Landscape Strategy partnership been more relevant, with local people looking to the TLS for help. As guardians of the Arcadian Thames, the TLS needs to continue its mission of protecting and conserving the network of views. Not all are at threat but those that are can be lost very quickly and can take generations to recover. Views Matter! is a new initiative of the TLS to protect, celebrate and conserve the remarkable network of views along the Arcadian Thames through our advocacy and conservation work. To launch the project a special event will take place at Kew Gardens on June 12th. The morning will include a series of lectures and discussion regarding the significance of views in historic landscapes and their conservation in light of ever-increasing housing targets and funding cut-backs.