The Thames Landscape Strategy Annual Event was held at the Nash Conservatory, Kew Gardens on the 11th June 2018.

This was the 23rd Annual Event that we have had and it didn’t disappoint.

It was a great privilege that we were able to have our patron HRH The Duke of Gloucester as the guest of honor alongside His Worship The Mayor of Richmond (Cllr Ben Khosa). The event was attended by over 150 guests representing councils, statutory authorities, local amenity groups, local interest groups (including sport, culture, environment, heritage, education), local businesses, and individuals. The event was hosted by Cllr David Cunningham (TLS Chairman and Kingston Councillor) and opened with a twist to normal TLS proceedings; a round the room opportunity for guests to speak and share their interests in the TLS. This was very successful and demonstrated the breadth of support the TLS enjoys. One member made the point that not only was representation at the event broad in the sense of organisations present, but also in that the TLS has cross political support with council representatives from Labour, Conservative, Liberal and independent; which is rare and powerful in its own right.

Jason Debney (TLS Coordinator) gave a presentation update on the work of the TLS over the last year with specific mention of future projects; Once upon the Royal River is a new umbrella project that is currently being put together to look at the past, present and future of the River Thames, how it was shaped over time, by royal influence, industry, development, and recreation, and the struggles it now faces in the light of floodrisk, pollution, and climate change whilst still needing to act as a resource for wildlife and people. This exciting new project looks to highlight the heritage of the Thames whilst helping to shape its future. 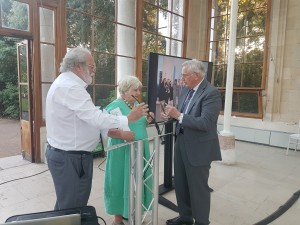 HRH closed the event with remarks and a presentation to retired Councillor Ruth Lyon, the Thames Ditton ward representative at Elmbridge for more than 40 years and one of the original founding members of the Thames Landscape Strategy 25 years ago. Ruth has been a stalwart supporter and representative on the TLS board since its inception and has served as TLS Chairman on several occasions. She stood down at the last elections in May and HRH presented her with a horse shoe, a traditional TLS gift of recognition of service. The TLS staff, partners and friends wish Ruth Lyon a happy and well deserved retirement.

Overall the event was a great success, was well received and had a vibrant buzz about it. It very much looked to the future and showed great promise of renewed support and up-coming projects that will continue the TLS mandate to conserve, promote, and enhance the remarkable River Thames. 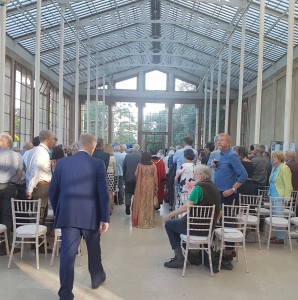