The Arcadian Thames in South west London and the lower James River in Virginia are two of the world’s great cultural, historic and natural waterways. Remarkably, their destiny has been linked to each other for  over 400 years in many extraordinary ways, now firmly cemented through the River Friendspartnership.  This partnership between the Thames Landscape Strategy (an organisation dedicated to the conservation of the Arcadian Thames) together with its charity The Father Thames Trust with Scenic Virginia and The James River Park System (in Virginia) has evolved into a strong Trans-Atlantic relationship that has made a real difference to the lives of people and the riparian environment in both the Old and New Worlds.

Over the years, it has been a realisation of the similarities between the two rivers (including an identical view over a bend in the river in both Richmond upon Thames and Richmond VA) and the aspirations of the communities that live alongside them that has provided the inspiration for the partnership. The relationship was born from a civic twinning arrangement, the friendship evolving organically into a much deeper partnership that is now exploring new ways of joint working that has seen a real and tangible benefit to the respective river landscapes.  The friendship is well placed to capture a growing understanding in the need for cross-catchment liaison, tourism, landscape restoration and a new impetus to see the conservation of scenic landscapes in both the UK and USA.  Wider relationships have developed through joint visits between many organisations, groups and individuals that have a stake in the Thames or James River landscape.

Representatives from environmental and scenic organisations from along the historic James River in Virginia visited London in June to celebrate the 25th anniversary of the Thames Landscape Strategy partnership.

Leading the Virginian delegation were Chief Anne Richardson of the Rappahannock tribe and Chief Ken Adams of the Upper Mattaponi, to thank Londoners for their support in assisting the Virginian Powhatan Indian Tribes in gaining U.S. Federal Recognition in 2018. Hosted by The Lord Watson of Richmond and Baroness Kramer, the Indian Chiefs were guests of honour at a special event in the House of Lords and at the launch of the London Border Crossing Festival at Shoreditch to celebrate the contribution that indigenous people make to the capital city. 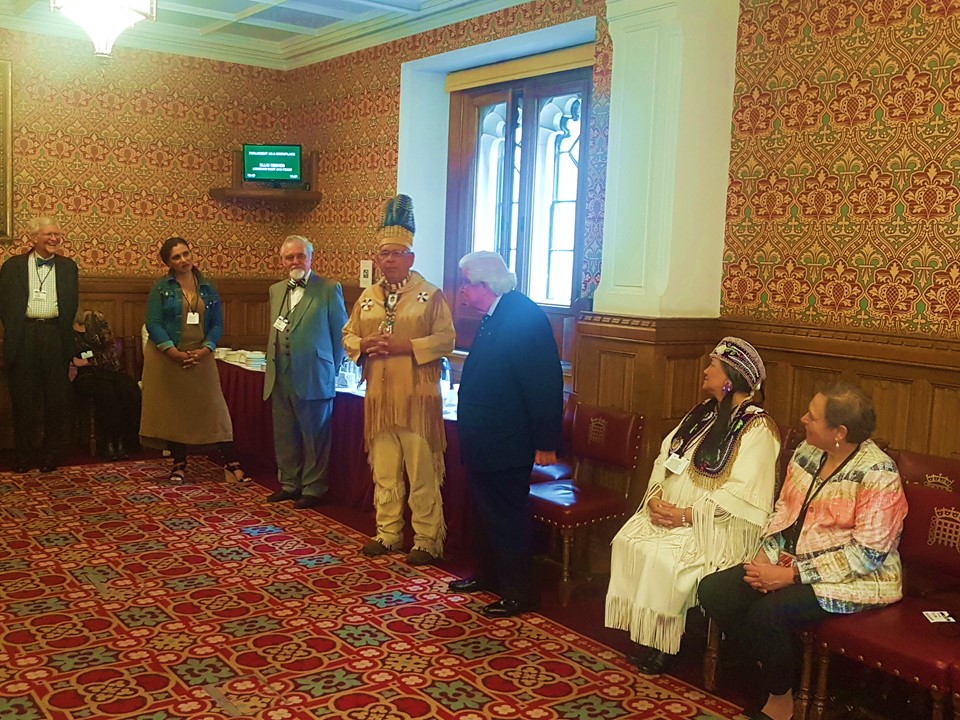 The 20-strong Virginian delegation toured the River Thames being shown examples of spaces which have been transformed through the Thames Landscape Strategy partnership over the past 25 years totalling a staggering £25,000,000. To mark the milestone two conferences were held including an international symposium on the management of historic views at Kew Gardens in memory of the prominent campaigner for the protection of important panoramas James Batten.   The programme included a well received speech on the ways that important views along the James River and wider scenic landscapes in Virginia have been threatened and protected.

On Thursday 13th June the Thames Landscape Strategy celebrated its anniversary with a reception at London’s City Hall attended by 250 representatives of the TLS partnership.  Guests of honour were TLS Patrons HRH The Duke of Gloucester, Sir David Attenborough and Richmond City Councillor The Hon. Kimberley Gray.   The Virginians were able to meet with like-minded people from all manner of environmental and heritage groups in London providing a lively debate on ways to move the partnership forward. 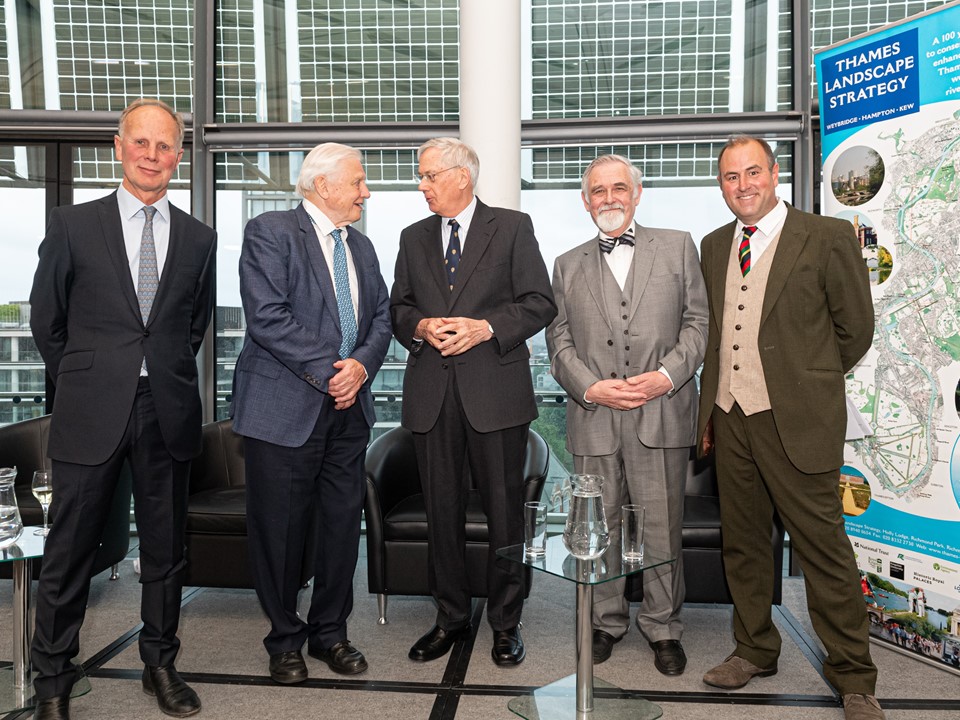 The culmination of the anniversary saw 200 guests attending a gala event at Sudbrook House in Richmond for the award of the Richmonds Medal that is presented (jointly by the TLS and Scenic Virginia) to an individual who has helped to conserve either the James River in Virginia or the Arcadian Thames. Previous recipients have included Sir David Attenborough and actor and conservationist Robert Duval.  This year’s joint recipients were Lord Watson the President of the Father Thames Trust and leading landscape architect Kim Wilkie the founder of the Thames Landscape Strategy.

Jason Debney the Director of the Thames Landscape Strategy said: “We celebrated our quarter century in style. Over the years we have restored the riverside and seen a transformation of the world-famous Arcadian Thames that few thought possible.  It was an honour to mark this occasion with our friends from Virginia who we share so much in common with”.

As the partnership moves forward a series of key joint aspirations emerged. The conservation of nationally important views, the restoration and promotion of the James River and the Arcadian Thames that share so much in common (both being a string of pearls that has played a significant role in the making of their respective nations), the continuation of the cultural ties between the Virginians, the Virginian Indian tribes and the Thames and a series of natural environmental enhancements including the re-introduction of the sturgeon for example.  The next step is to find a sponsor for the River Friends partnership to allow for the exciting raft of joint projects to be taken forward. 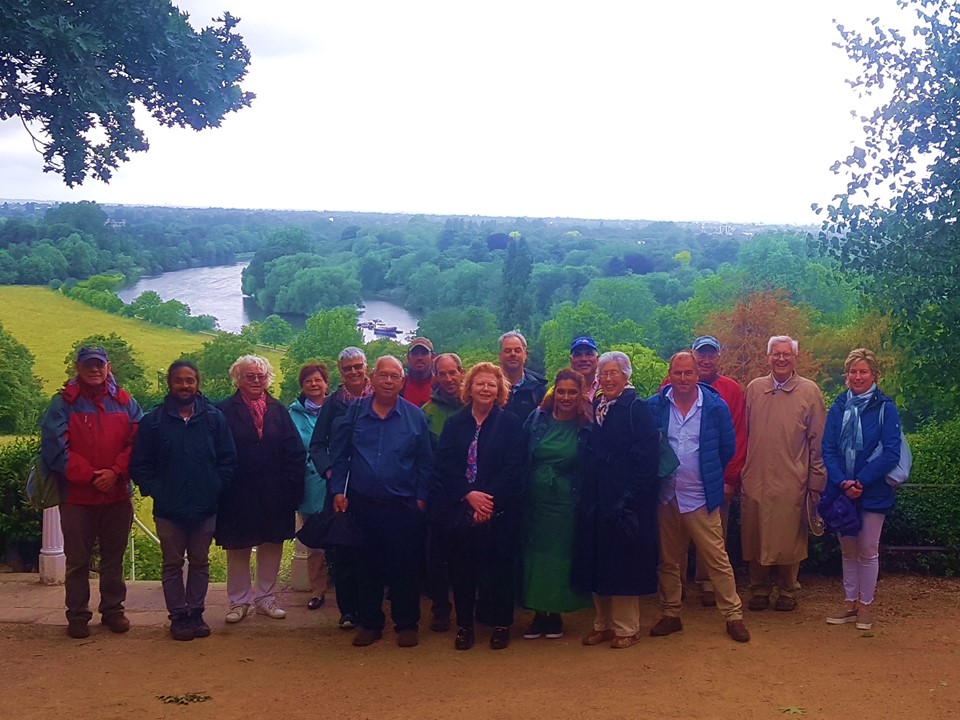