TLS Co-ordinator Jason Debney spent a week in Richmond Virginia this April meeting partner organisations, lecturing and learning how the James River is managed.  The visit was part of the long-standing relationship between the Thames Landscape Strategy and a number of organisations in Virginia including the James River Park, Scenic Virginia, Beautiful RVA and Capital Trees.

Jason gave several lectures on his visit to a range of organisations such as the James River Advisory Council at the Deep Run Recreation Center (an umbrella group of many different organisations similar to the TLS Community Advisory Group), to local press, landscape architects and City of Richmond staff.  A key note speech was given by Jason at the Beautiful RVA Meeting held at Lewis Ginter Botanical Garden followed by a dinner hosted by Cabell and John West on behalf of Capital Trees.  In his lecture, Jason outlined the work of the TLS and demonstrated how lessons could be learnt from the Thames experience particularly on how to implement a ‘plan’ and ensure that views are protected.  Jason finished with a romp through the recent Richmonds of the World medal ceremony at Hampton Court Palace.

Jason toured the riverside with City planning officials and staff from the James River Park System at their magnificent Reedy Creek headquarters before touring the Riverfront to look at potential projects.  Richmond City Council has recently published a Downtown Plan and a Riverfront Plan  to help shape the future of the James River.  He was shown several ground breaking schemes to rejuvenate the riverside including Brown’s Island Dam Walk, 14th Street takeout, the Pipeline, and the overlook at Mayo’s Bridge – plans that include a proposal for a new ‘green’ bridge across the James. 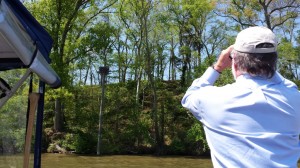 During his stay Jason also visited Lewis Ginter Botanic Gardens to see the magnificent changes since his last visit and to look at a tree planted in 2007 during a TLS trip.  Jason was also taken on a boat trip by Mike Ostrander of Discover the James Tours.  The afternoon boat ride passed through some of the finest watery scenery on the East Coast and included stops at the USA’s second permanent English settlement and at known Native American village locations of the Powatan Indians.  The highlight of the trip however, was the bald eagle and osprey watching.  Mike, who knows the river intimately was able to get close to literally dozens of birds including the biggest (natural) sand martin wall imaginable. 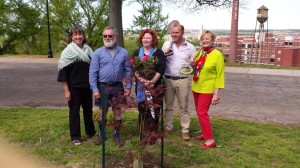 The visit concluded with a tree planning ceremony on the brow of Libby Hill.  The tree planting marked the on-going relationship between the two Richmonds but was also intended to demonstrate the Thames Landscape Strategy’s support to Scenic Virginia’s Indignation Campaign to save their view from a potentially devastating planning application that would sever the 180 degree panorama split in two.