Skip to content
If anything, the weather was even more glorious that the first day.  had an exotic, foreign air in the bright light and searing heat as I walked from the station to meet companions at the Tide Tables café. How I regret saying on that first day that the pace would suit Meg, my poor old dog. The day almost finished her off, she has been limping ever since and the vet says no more long walks for a while, perhaps never. For a dog-owner without a dog, any walk is rather unsatisfactory. At least this time, with plenty to look at and talk about I would notice her absence less.
Tide Tables café is a good place to meet. I was introduced to Ann Sayer of the Teddington society and, beneath the shade of the enormous planes, we talked of what we were to see that day.
Setting off, with Jason and Becky, was like “Mad dogs and Englishmen go out in the midday sun.” For a moment there was no breeze, and I was reminded of the North African desert, oven-like at half past ten. What was it going to be like at noon?
The first thing to catch our eye was landing stage. Extensive and well used by trip boats, but in need of TLC. Not all of it is in use currently, and some temporary mooring for private boats could be provided if the whole thing were given a makeover.  Temporary moorings are in very short supply on the tidal , and there is always the worry that they will be squatted by homeless residential boats. A town centre mooring like landing stage would be very popular. Boat owners would think of as a destination, and be able to visit the town by water. Every point of interest on the river needs moorings so that leisure boating can extend to visiting places on the river, instead of sailing past unable to stop.
We passed sad little , left out of the project because the ancient rear wall, which supports the highway behind would have cost too much to repair.  There will come a time, when it is close to collapse, when we can seize the opportunity to restore this quaint little patch.
A much larger open space lies a little further upstream, within it two commemorative gardens. One, touchingly, in memory of a young woman killed nearby, the driver did not stop. The last photo in her camera, minutes before her death, was taken from this spot.  Her family helped design the planting with her favourite plants, and still visit.
Memories of the Three Pigeons pub come back as we pass the site, now occupied by mundane flats as a result of one of the longest ever planning battles.
We bravely decide to head up the famous , so we duck under the Duke of Buccleuch’s famous arch. It is amazing that this classic folly is not a listed monument. It is made of a collection of bits and pieces collected from all over , the capitals from Tewkesbury Abbey are especially interesting. It has recently been pointed by what looks like the correct lime putty, but cannot be. It is both cracking off and attacking the ancient statuary. Something must be done!
The formal gardens we emerge into from the tunnel glow like Persian carpet. The planted beds just blaze with colour under the bright sun. This is the heart of the landscape changes made by the project and, later TLS, to restore the famous view from . It is remarkable to look at what seems to have been here for ever, and hear how much was altered, and what distress was expressed at every proposal; distress which has largely turned to approval as the plans have matured.  The Enlightenment seems very close as we pace the walk along the top of the hill as our Georgian forbears would have done. I promise myself to bring a volume of Alexander Pope next time I visit here, and read it looking over a view he would have known so well. So many touches that seem to be part of the ancient fabric are in fact clever restoration. The cast iron posts with their pineapple finials for instance, all cast, by TLS, from one survivor.  The dichotomy of restoration is if you do it really well, no one can see what you did, and you are unappreciated. If people can see what you did, you have failed. 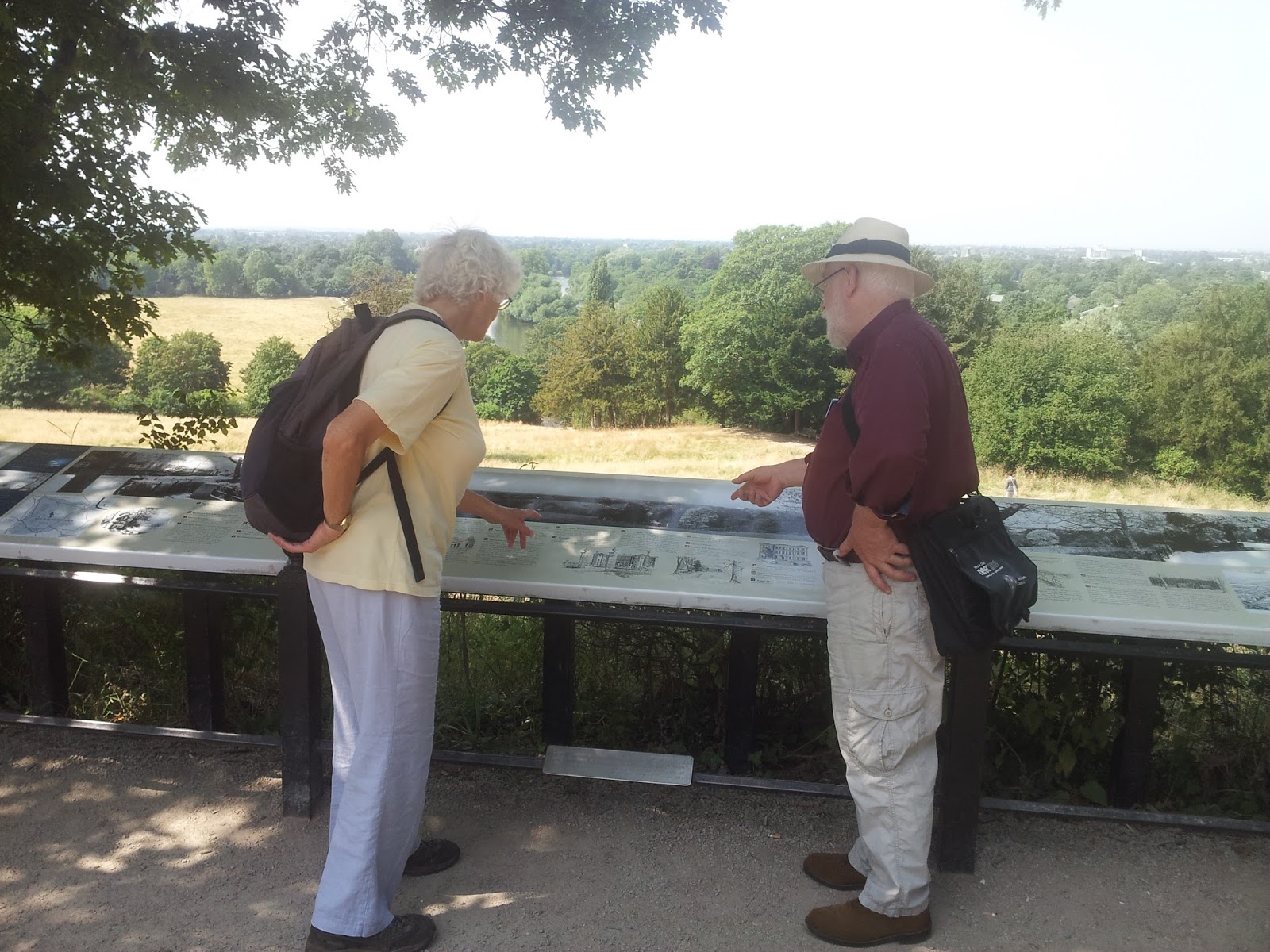 We follow a path down to the river, and pass an ugly loo building which survives the landscape restoration by popular request, there being so few loos. Those chaps in the thirties knew a thing or two. They could unerringly blot the landscape to maximum effect.
As we follow the river along the edge of Petersham meadows, (past the site of a cataract, I am intrigued to learn) we make notes to have the Council contractors reminded not to let the bank revert to a dock leaf monoculture. It is important habitat, and proper management is vital to many species of bird and insect.
The woods to our left also need attention, but a path leads to the locked gate looking into the corner of a composed and elegant classical garden. It is a wonderful contrast between the wild and the formal. We come to the lowest part of the footpath, and I am shown the damage the path sustains from flooding. Massive chunks of concrete have been shifted all over the place.  There are places it would be quite dangerous, because of potholes, to walk or cycle when the path is covered by water. 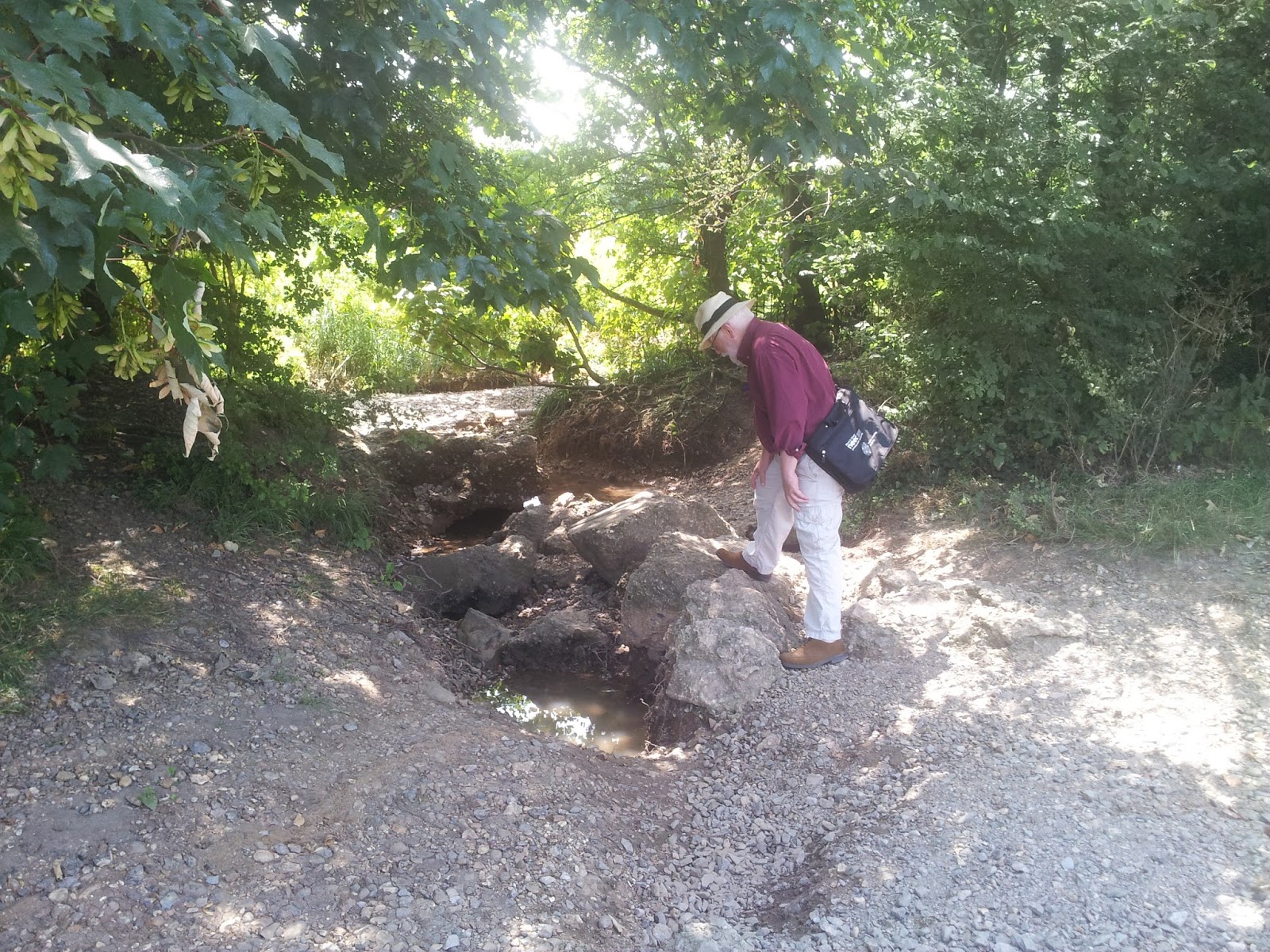 The plan is to create creeks, and bridge them with low rise wooden bridges, (of the type commonly seen on the .) The rest of the path, (which will not flood) can be resurfaced with gravel. That this will be the pattern at many places between here and Teddington. The creeks will enable the use of the adjacent woods for the rare and wonderfully productive habitat known as “wet woods.” Small sections already exist near Ham House. Walkers traverse them on board walks, which is fun.

I had not walked this section since the trees screening Marble Hill house from the river has been removed. It was a brilliant sight across the water, just as the designer intended, four-square and perfectly proportioned, framed by ancient trees, another Enlightenment moment.
The café at Ham House was a haven of coolness. They were doing their duty by walkers, plenty of water points for rehydration. Never has their range of wines seemed more tempting, but I was only too aware of the distance still to go, and made do with ginger beer.
It was surprising that the lavender was not out in the wonderful cherry garden, although from some angles one got the impression it was only a matter of hours. (There were no cherries either.)
The magnificence of the House and its gardens mean that most people hardly notice the incomparable lime avenues. They are only a fragment of their original extent, but still yet another Enlightenment experience. The more so when I learn that Handel composed “Where E’er You Walk” among these very trees. Thanks to him, perhaps, a cool gale did seem to cool the glade.
An unattained objective of the project was the restoration of the . Standing outside the main entrance to Ham House, I began to see what an extraordinary concept this was, even at its 18th century inception. Great worthies of the time, decided to link, by way of an avenue of trees, the Turner viewpoint on , and Radnor House in Twickenham. It was intended to be principally a visual link. As it crosses the river twice, without bridges, it could not have been a pedestrian route. Looking east from Ham House, one can just see the Star and Garter, but there is a whole lot of scrub and overgrown trees intervening. One can surmise that some trees were originally part of a grand plan. Turning west it is most intriguing. Over the years a number of attempts have been made to restore the avenue, but somehow the alignment has got out of kilter. The stretch at Ham House, (none of the trees very old, and some already distressed) is definitely out of sync with the next stretch which has become the driveway of the Rifle club, and completely off limits. Walking through the field between the river and the Rifle club, it is clear that the subsequent stretch could be linked to a new stretch through that field, and linked to those at Ham House. A lot of what was done on the project has since been grown over, and the woods one enters after the “bottle” field are wild and unkempt indeed. Being remote and unmanaged they have become a focus for anti-social behaviour.  Nevertheless, an attempt to complete the restoration of a great, though eccentric, landscape feature does have an appeal. As we wander back to the river through meadows and glades it becomes apparent that much of this area, “Ham lands,” could by the use of creeks and hedge planting be returned to river meadows where stock could be run. It has a strange abandoned feel at the moment, huge grass growth but no stock proof barriers. It would be another wonderful project to bridge the low bits of towpath and create creeks into this area.
Heading on, up to Teddington, we hit upon a strange phenomenon. It is a good season for the white poplar. It is seeding by the bucket load. It produces seed that looks, and behaves, much like cotton wool. We find ourselves in a shady grove with a snowy white carpet and trees branches festooned like Christmas trees in white fluff. It is unnerving to find that, at 32 Centigrade, we are in Santa’s Grotto, and let me tell you, I know more than most about Santa’s Grotto.
At this point I begin to feel really glad we decided to finish at Teddington, instead of going on to .  The lock comes in sight, but it is, I remind myself, a notional rather that practical journey’s end. From the first sight of the lock to the bus stop is surprisingly long. I go for the 281 to Twickenham, where I can get the train back to Chiswick. Not only does the air-con on the bus not work, but is almost full of healthy teenagers returning from a vigorous sports day, still in their games kit. Humm-m. I overheard their conversation about climate change. “I like this kind of Global Warming better than the sort of Global Warming where it’s raining and cold.”
Could this be the Met Office let out? We are having the wrong kind of Global Warming.