Skip to content
No more purple prose about the weather, now rather dull and humid. Teddington is very down to earth compared to the exotic, foreign air of Richmond in the bright light and searing heat a few days ago. The 281bus took me from the station to meet the others at Floating Cloud café, still missing Meg, my poor old dog. She is still limping, but eating well and cold nose.
It is a proud moment to be meeting where so many little boats gathered in 1940 for Dunkirk. The footbridge is familiar from the movie. I wonder what they felt, setting off across the Channel to the rescue. Apprehensive might be an understatement.
Odd rain drops, thick humidity, distant rumbles of thunder, ominous start as we cross the bridge. The bike/buggy access is a fine piece of TLS work, and the much appreciated. If my term as chairman produces just one thing as practical, and attractive as this I will not have wasted my time.
A touching meeting with some local volunteers gathering wild flowers for the funeral of someone who has worked so hard on keeping Ham Lands attractive. It is sad to hear of her passing, but good to be able to add a tribute from TLS to the many tributes that will be paid.
There are some temporary moorings opposite to upstream end of the lock. They are not much used because a little further upstream there is a collection of residential boats, many unlicensed. This stretch is not designated for residential mooring and is a cause of some controversy. It is strange that some, not all, people should add to their illegal occupation of moorings offensively unkempt appearance of boats, and untidy colonisation of bits of river bank. Good neighbourly behaviour would aid their case. We see many which, were they houses, would be subject to planning enforcement.
The legal matters around the illegal moorings are the subject of a discussion at the Hawker Centre with a local ward councillor, David Cunningham. We hear that Richmond have a new by law in course of adoption, and that he is concerned about the effects on the Kingston stretch when it is enforced. It is distressing to hear reports of more conventional residents being harassed by some from the illegal moorings.
An upside of the discussion is that we are under cover for a significant downpour, and emerge as it finishes. We inspect a hedge planted by TLS that has suffered from lack of watering, and talk about acquiring a portable pump.
The approach to Canbury Gardens is along as narrow and crowded stretch of path as any encountered so far, but it seems to work. We have to step aside for cars and bikes, but no one actually runs us down. Maybe living in Kingston teaches one tolerance. 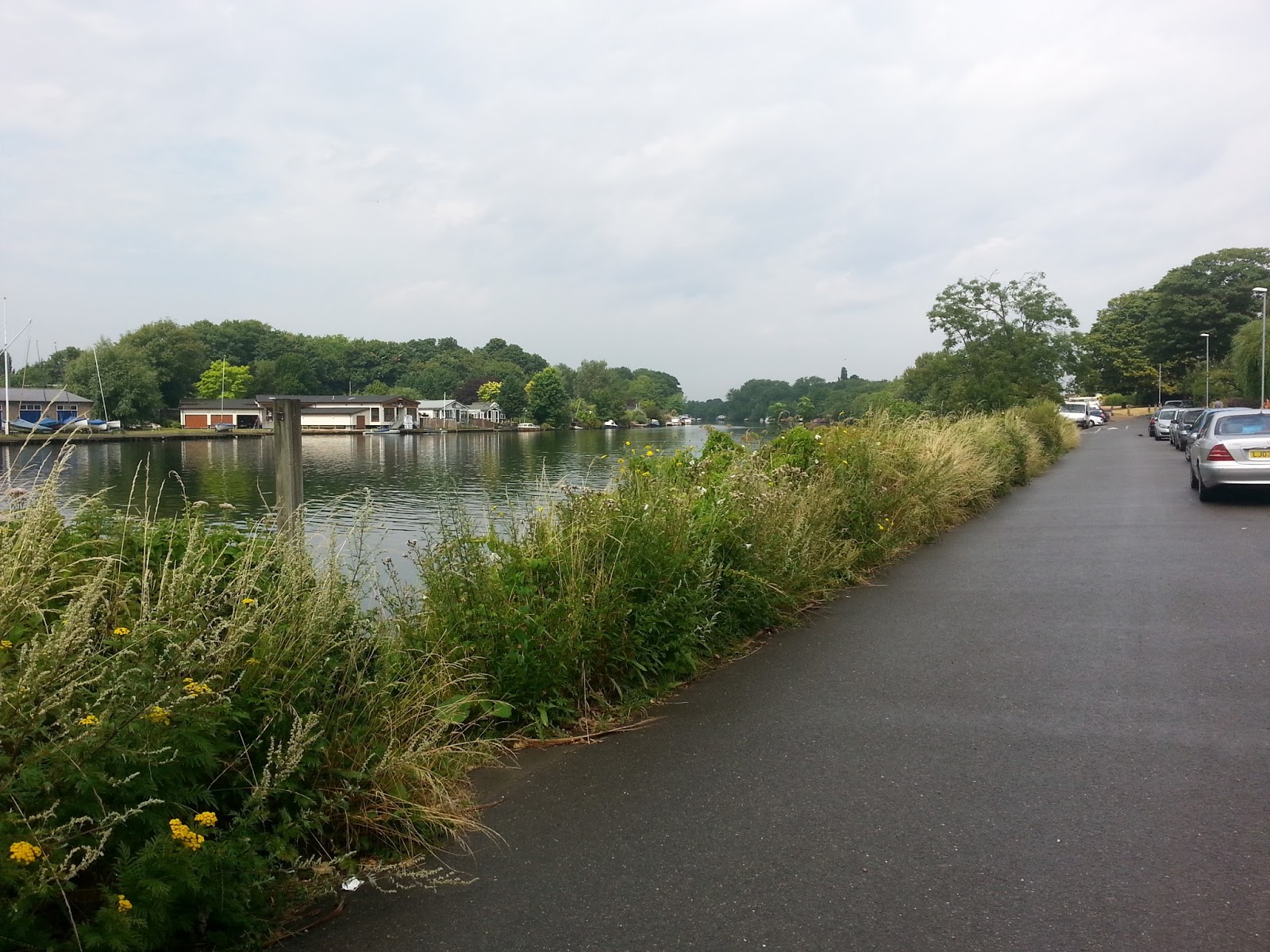