Skip to content
It was such a beautiful day, I felt churlish to be wondering if it was actually going to be too hot. The change of the route to end at Richmond on the first day instead of pressing on to Teddington Lock, caused me no distress whatever. You may think that it is an easy stroll, but doing it “site-visit” pace, slowly and stopping to look at things and make notes is actually more tiring than striding out at a good pace. At least the pace would suit my elderly dog. 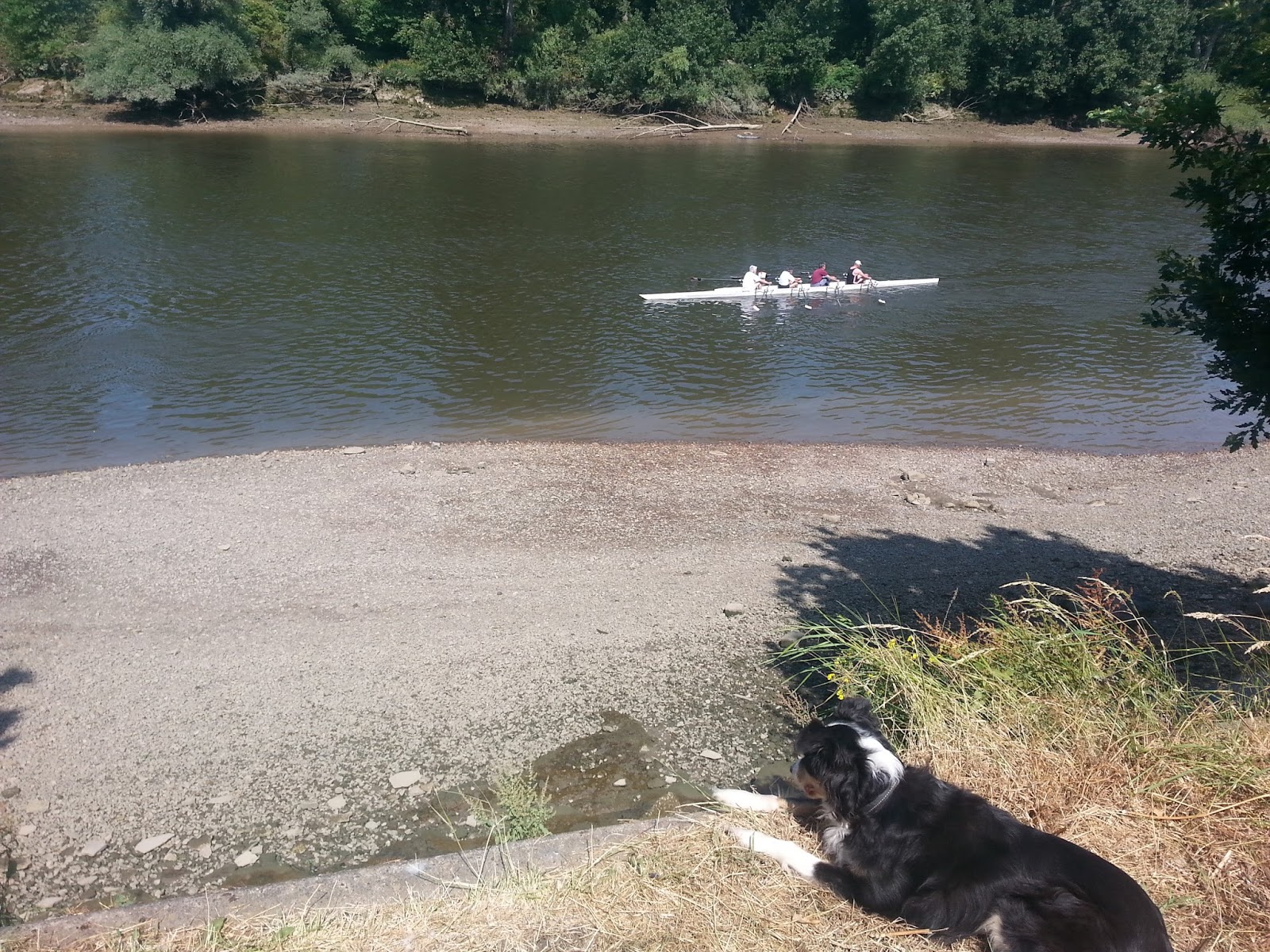 As I waited for the others in the car-park by the Brentford Gate at Kew Gardens, I was slightly unnerved to see visitors to the gardens lathering on the factor 25, and checking their survival gear, like explorers of the Upper Nile. It took me back to a walk I did up the Kafue River, in Zambia. Only sun-cream whose smell did not alarm wild-life was permitted.
When Hilary Pickles of the Royal Thames Society, Ian Bruce of the Richmond Society and Dido Berkley of Thamesbank had joined Becky, Jason and me, we heard about the grand plans for that very car park. It was to be relocated and replaced by a showcase garden, but the visionary plan, widely applauded but not yet quite fully funded, is for a bridge to Brentford joining to the new access to Syon House. Visitors would be offered a ticket for both sites, although it would be a heroic effort to get around both in a day.
Heading along the towpath proper we pondered the growing threat of flooding. The flood wall finishes at that car park, upstream is unprotected. King George’s ha-ha ran along between us and Kew Gardens. The grade one listed brickwork was hardly visible among the wild greenery. If it is to be a part of flood amelioration, should it not be better kept? On the other hand, it would be shame to be too neat and tidy and lose all the charm of the wild. This is a theme which sounds through everything TLS does and in almost every part of the strategy area. It was a constant thought the whole of the walk, and, on balance on the Kew to Richmond stretch at least there was plenty of scope for what gardeners call a “good cutting back.”  Having known this part of the towpath for years I was saddened to find how very much growth was in between a pedestrian and the river. A horse could not tow a barge along very much of it, not that it should be the standard, but brambles six foot high completely hiding the river is too much. Local Authorities can be too sensitive to those who hate to see any tree cut. It is wonderful that people want to protect trees but along our walk we found features completely obscured and vistas blocked by uncontrolled growth. There is a worry about the right balance of habitat if previously open areas are choked and darkened.
At least the marvellous spot between Kew Gardens and Syon House was wide open. It was just grand to be alive to see it on such a brilliant day. One could for a short moment put aside important considerations like the Water Framework Directive, and enjoy the view. Always learn something new. Repton designed the grounds of Syon and Kew Gardens to be all of a piece. Kew Gardens has been altered out of all recognition, but I will always treasure that nugget, and maybe win a pub quiz with it.

Beyond Kew Gardens the revetment is less steep, and lower. It is colonised by vegetation, which is destroying the concrete. The revetments on our side, and the hideous sheet piling at Brentford, being left behind the prospect is more pleasing. There is willow planted at the edge of the broken revetments to prevent further erosion, which is doing well, actually rather too well. In future it will have to be hazel, less rampant. The willow needs to be “spiled,” (cut and plaited into the remaining stems) to form a barrier, in the traditional way. We need to mobilise winter volunteers for this cold, muddy, tiring task. Strangely it is tasks like this that volunteers do come forward for. There is scope for volunteers to start hazel planting upstream.
The first of the meridian lines is shown by an elegant stainless steel marker, with a sighting gap, and the line itself marked in brick. Sadly trees have filled in the view. This is an area where the ha-ha no longer has a Georgian wall, but meanders about. It is ideal for a wet woodland project. Such a project could also keep the meridian sight line open. We must not let such important history get lost in the undergrowth.
We pause opposite Isleworth. It is about noon and the ringers are practicing on the church bells. It is a paradigm of Olde England. If only the proposed ferry was operating, the London Apprentice looks so welcoming, and the heat and all the talk are building up a thirst. So many ideas emerge for Isleworth, but that is for a later day. Today we focus on this bank. A tree, marked as if for removal, appears when we look to have a terrible parasite from which it will not recover. If it has to go we hope it will be quick. These things spread alarmingly fast.
The surface we have walked on has changed from smooth tarmac at Kew to gravel to rugged stones and as we are get to smooth tarmac again we meet Nicki Wood of the Richmond Society. The lumpy surface in the narrower stretches has the merit of slowing cyclists for the benefit of pedestrians and buggy pushers, but is a serious impediment to wheel-chairs. Wheel-chair users should be able to access all that we have seen, but would there be contention with speeding cyclists? There are proposals for a much wider path to accommodate a cycle super highway. It would change the environment drastically, and not be that super for cyclists. It is a long way around.
Approaching the half lock we find ourselves on a most elegant surface of resin-bonded gravel, legacy of the Arcadia project. Pity it is so expensive, it would look good in so many places. The boats negotiating the lock remind me that there has been nowhere on our walk to moor a boat. A shortage of temporary moorings reduces the use of the river for many, but concern about illegal residential mooring makes them a low priority for Councils. We do need more temporary moorings, and bye-laws to protect them.
Approaching Richmond itself we find ourselves among views familiar from prints and post cards, even table mats. The famous bridge, (especially viewed through the railway arch) is splendid in the way only a gem of classical of classical architecture, in glowing sunlight, can be.
We review past achievements of TLS along Cholmondeley Walk, and note where more needs to be done.  Entering Richmond this way, on a sunny busy day, has a feeling of leaving the country and getting to town that we seldom feel in these days of motorways and ring roads.  The stroll along in front of the Terry Farrell building, and the well-used terraces has a definite feeling of arrival. The shady garden, (another TLS achievement,) of the Tide Tables café is journey’s end for now. We are joined by Miranda Jaggers of the River Thames Boat Project, which connects with my involvement with children and disability, so this has been a day of more than average serendipity. I hope the following days provide as much.