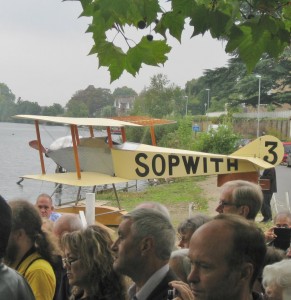 On Saturday 20th September the TLS unveiled its 20th Anniversary Project in Kingston.

Working in partnership with the Kingston Aviation Centenary Project, Royal Borough of Kingston, and Canbury and Riverside Association, a new lectern was designed to show the history of Aviation in Kingston, including a map of the old factories.

The northern entrance to Canbury Gardens hosted a public event to celebrate the unveiling, sponsored by the Father Thames Trust, Creed-Miles Ltd, and the Brooklands Museum.

Brooklands very kindly provided a replica of the 1914 Schneider Trophy winning Sopwith float plane that was tested at the Albany Boat House slipway and visitors to the park had the opportunity to see a small piece of history recreated.

As well as the plane, visitors were treated to the wonderful music of the Band of the Surrey Yeomanry who provided a perfect programme of music summing up the feel and mood of the occasion including “those magnificent men in their flying machines”.

The plaque was unveiled by Sir Tommy Sopwith and other guests included the daughter of the 1914 pilot and other members of the aviation community and their families.